Breathing heavy, she replied a simple "yes," that was probably all that she could get out.

I could feel her wetness on my fingers and moved closer to her as I lifter her leg up off of the bed and slipped mine under hers. I quickly pulled off my boxers and moved my body up more until I was in contact with her.

At this point my body was aching so badly and I was not sure how long I would last. I inched closer and felt my cock on her lips, as I reached around and teased her with it, moving it up and down careful not to penetrate yet.

She was incredibly sensitive at this point and she was moaning again. I pushed the head in just enough and pulled it back out, this usually drives her crazy and she meets me with a thrust, but tonight she seemed a little tired from the foreplay. I leaned back and grabbed her shoulder and with one big push I slide it all the way in. I sat there for a second and just felt the warmth of her body on mine. 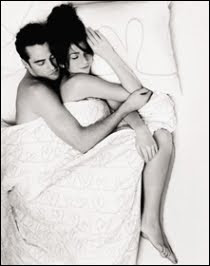 My fingers reached for her clit again and went back to work as she writhed under my touch. Picking up the pace I pushed harder and harder into her, her breasts were moving now with every thrust.

I love the way her breasts move when I am having sex with her. She has great breasts and love to rub her nipples as they move. Sensing that I was getting close, I slowed down. Pulling my head almost all the way out before thrusting it back in. My arm reached under her knees and pulled her legs up in the air as I started thrusting harder again.

Quickly, I moved around the bed trying to keep my cock inside her as I did so and moved my body above her. Sweat was pouring off of my face now as I was my pace was fast.

My body tensed and I could feel I was at the verge. With one quick thrust I pushed inside her and came deep insider her. I kept going as long as I could but felt myself getting softer with each thrust. I stopped and looked down at her and saw she was happy.

Later that night I was lying on my back with her next to me and an arm on my chest. I put my mouth down on her head and kissed her hair and she fell asleep. I thought maybe in the morning we could do that again. Of course it was already 1:00 am and I knew the morning was coming quickly.