Running with my Shorts Down

September 12, 2010
Today was my long run day in my training for the half marathon. The first of many longer days and the first time that I ran more than 5 miles in many many years.

I felt great yesterday when I ran the 3.5 miles and actually thought I could do more, so when the training called for me to run/walk 7 miles today I thought maybe I can do the whole 7 miles without stopping just at a slower pace.

Well I started out great, running about a 9 minute mile, which I thought was good for that distance. I did try to put my cell in my pocket thinking if I actually cramped up and lay dying on the trail that I could call someone to at least cart me off somewhere. When I put my phone in my pocket I noticed that the phone was slowly pulling my shorts down. These shorts lost the drawstring waistband a few months back, not sure what happened.

So I decided to carry my phone so I would not have to worry about flashing the other people on the trail.

Off I went, 3.5 miles into it, sweating like crazy now, its still 90 here in the south, still average a 9 minute mile and feeling great. I did my turn to go back down the trail and realized that my shorts were heavy from sweat and they did not feel right. They were slipping off.. and since I lost a lot of weight the boxers that I had were also big and they started to slide down too.

Well there I was about 3 miles from my house, my shorts and boxers falling down to my knees. So I tried to take one hand and hold them up, while the other held my phone. That did not work too well and they still slipped down revealing a little more than I would have liked.

At least I did not know anyone on the trail, until... 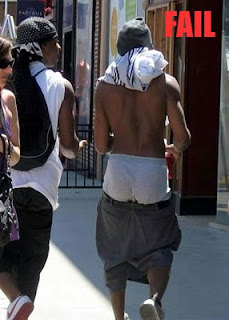 I heard behind me a biker getting closer and turned my head just as she passed and realized it was one of the women that I used to go out to lunch with at my job. We had a lunch crew for a while that when we would all go out everyone would come home laughing, mostly because we would joke with each other the entire time... and there she was.

So she laughed hard when I explained why I was holding up my shorts, but did offer to help me with my phone so I can switch hands. She rode along side while I ran as I explained my problem to her and asked her to promise not to tell my other coworker that would ultimately never let me live it down... but at least the problem was somewhat averted. I could switch hands and I did get to talk with her a while.

We have not gone out to lunch in quite some time so it was nice to spend the time talking.

At least I did not reveal anymore to the rest of the trail as I made my way home.